By Tracy and Janet Hays

Day 1.  Tuesday July 14th our group met and camped at Big Larch Campground in Seeley Montana. There was Karen A our trip leader and her friend Bev, Louise, Kit and Henry, Mark and Karen R, Fran, Tracy and Janet and Judy H.  Our boats were 3 tandem canoes, a solo canoe, an inflatable canoe and 3 kayaks.

Day 2. We paddled the Clearwater Canoe Trail at the north end of Seeley Lake. It was a nice narrow winding flatwater paddle with heavy brush cover in super clear deep cold water. Then we paddled back to our Campground. It was about a 5 ½ mile paddle today. Several of us hiked to Morrell Falls, a 6 mi round trip hike. The Falls were very beautiful. The trail to the falls is burnt and dead, not so nice. Then several of us hiked to “Big Gus”, a huge Champion Larch tree near Seeley Lake. We camped at Big Larch again.  We heard loons calling a few times.

Day 3. We all left for the South Fork Flathead. Janet and Tracy stopped along the way to hike at Holland Lake and Holland Falls. Kit and Henry had done this hike a day or so earlier and told us about it. It was a three-mile round trip fantastic hike on a beautiful trail to the far end of the lake. Then up the mountain to the falls.  Holland Falls are really nice but not quite as nice as Morrell Falls, but the hike getting there was much nicer. We talked to locals who cautioned us of a couple recent drownings on Montana Rivers due to high water. He told us to check Swan River which was on our way. The put in is at the junction of Highway 83 and 209 just west of the 209 Bridge. We found the put in, looked a little sketchy, but the river was beautiful and leads to Swan Lake. Maybe a future trip. We then stopped at the town of Hungry Horse for fuel and supplies. We got some huckleberry wine, huckleberry taffy, fresh huckleberries and had a huge huckleberry ice cream cone. This is huckleberry country and huckleberries are in season! Then we drove 50 miles south on a very dusty gravel road on the east side of Hungry Horse Reservoir to the South Fork Flathead River. Spotted Bear Campground was full so we went to Crossover campground, which has a nice view of Hungry Horse Reservoir, and set up camp.   This place is free and nicer than Spotted Bear.

Day 4. We took the boats to Cedar Flats on the South Fork Flathead this morning. We left one vehicle at the South Fork access area for our shuttle. We carried our boats down a long steep difficult path with many large steps to the river and finally launched just before noon. This river is beautiful.   This trip has been very nice so far, but we have driven 1,200 miles to get here and I’m hoping for more than “very nice”. Well, the first hour on the Flathead has justified all the miles traveled to get here. The scenery is spectacular and with flow at just over 2,000 CFS, is very bouncy and has some big wave train runs if you want, or most can be avoided. The South Fork Flathead attracts lots of fishermen with small inflatables, and some with big rafts.  We saw many beached fishing boats but few while paddling. We paddle about 10 miles today to the South Fork Access area, where we locked up our boats and left them for the night. We ran a shuttle back up to Cedar Flats to get vehicles and camped at Crossover again.

Day 5. Today we paddled from South Fork Access to our camp, about 10 miles. Really fun day of beautiful scenery and bouncy water. The water is so clear, where its calm you can see the bottom of the deep holes.  There was one class lll rapid that we scouted from the road during our shuttle and when we arrived by boats, we stopped and walked to it for a close-up view.  Several of us were pretty nervous about running it but had no problems (ran it on river left). The last mile or two of the paddle was in Hungry Horse Reservoir into a headwind but not too bad. Got to Camp around 2 pm. Later some of us drove 8 1/2 miles up Spotted Bear road to Outfitter Corrals and hiked down a really steep trail to a beautiful stair-step waterfall. Then we drove a couple miles past Cedar Flats and hiked to Meadow Gorge, a beautiful place where the river narrows down to just a few feet wide through a deep canyon, really nice. There is a high walking bridge across the river which gives you a great view. You better be an expert to run this gorge, none of us did. At camp, Henry and Kit surprised us with a delicious huckleberry pie they had bought while in town and shared with all.  There seems to be more than one huckleberry junkie amongst us. We stayed up until about 11 p.m. and saw the Neowise Comet. It was somewhat visible with the naked eye but was really cool to see with binoculars. We camped at Crossover once again.

Day 6. We drove to West Glacier and set up camp at a private campground.  Each time we move on to a new camp site, a team of “highly skilled engineers” assists Karen in folding up or unfolding her pop-up slide out origami camper.  I think as long as Karen owns this camper, some of us will be welcome, or perhaps required on any trip it makes. Judy A joined our group today.  We went and scouted a couple class lll rapids on the North Fork Flathead that we will run in a few days. Weather has been perfect so far on this trip, warm days and chilly nights. We couldn’t see the rapids too well from the road high above the river, but we had fun picking and eating the wild huckleberries in the forest and hoping we didn’t pick the wrong berries….

Day 7. We met at the outfitters at 9 a.m. and picked up their drivers to ride with us to the put in at the Canada Border, and the drivers returned our vehicles to their outfitter shop in West Glacier.  (They would bring our vehicles to the take out when the trip was over). The cost was $150 per vehicle. Jennifer was our shuttle driver and she talked two hours straight about all things Glacier, real nice informative gal. It was a long drive on gravel roads to the Canada border and we launched just past noon. We paddled 6 miles and set up camp early afternoon.  This river is home to the huge and endangered Bull Trout.  We hoped to see one, but no luck.

Day 8. It sure stays light late here, at 10 pm you can almost read.  A heavy dew last night and everything we left out got wet (gotta have something to complain about). We’re off by 10 am and all day we have a beautiful view of the rugged cockscomb-like mountain peaks within Glacier National Park. There was some bouncy water and Class II rapids today (one of which might have been considered more of a II+/3-).  One canoe swamped to the gunnels a couple of times today but never tipped over and we all helped bail it out. Judy H took the toughest line of any of us through this rapid.  Did she just pick a bad line? or was she showing off?, you will just have to ask her-but she made it!  Found a nice gravel bar to camp on where a side creek enters the river. A few of us got one more great look at the comet tonight, incredible night sky for star gazing.  16 miles paddled today.  This river is incredibly clear and fast flowing, wouldn’t it be awesome to put on a wetsuit, snorkel and mask and swim it!

Day 9. More of the same beautiful scenery today and more bouncy water paddling 12 or 13 miles. We stopped for a hike to the little town of Polebridge – where most of us bought some great fattening homemade pastries (yep, huckleberries again) and sandwiches for lunch.  The town runs off of solar and propane, with little wood cabins that people can reserve to stay in if they want. We camped on a huge gravel bar at river mile 24.  Mark and Tracy discussed dumb things they had done and playfully argued which of them was the worst influence on the other. Whenever we get to a rapid the most skilled paddlers in our group lead us through picking a safe line for the rest to follow.  That would be Karen A in her solo canoe, or Mark and Karen R in their tandem canoe, thanks guys.

Day 10. Another fun day of perfect weather in a bouncy river. We stopped at Big Creek for lunch. Had some wind today but not too bad.  A little farther down there was a real nice camp in tall trees just next to the river. A few of us swam the small rapids below camp in very cold water to a nice beach. Kit swam the rapids over and over, trying to convince the rest the water wasn’t that cold, yea right!  Tracy and Janet snagged the primo campsite here but Tracy soon discovered a huge branch was stuck in the v of the tree above the tent site, an accident waiting to happen.   He lassoed the branch and pulled and pulled with all his might to get it to fall out of the tree. Eventually pulling so hard the branch came down along with the top 20 feet of the tree which broke off, nearly smashing Judy’s tent, cool!  The tree looked healthy but turned out to be rotten. This evening Janet led us to the river to relax, watch and listen in our chairs.  She says “seeing a bear would be perfect”, just moments later it appeared, a beautiful cinnamon colored black bear, right across the river from us.  We all watched it calmly forage in the bushes for half an hour, then it disappeared into the forest, magic!

Day 11.  Kit and Henry, Louise and Judy A arranged to have their cars delivered to Great Northern Flats, the last takeout before the three class III rapids. The rest of us made it through the rapids heads up. We paddled 58 miles on the North Fork Flathead.  We got to Blankenship Bridge, our takeout and confluence of the Middle Fork Flathead and our vehicles were not there as promised.  The outfitter messed up and delivered ALL our vehicles to Great Northern Flatts.  Two hours later everything was right, except Henry broke a shock on his canoe trailer and had to take it off, drive to town and have it welded as a temporary repair.  Then we all had dinner at a place with outside seating in West Glacier.

Day 12 Today we parted ways.  Most of us took a drive into Glacier NP.  We went up to Logan Pass and hiked to Hidden Lake, then hiked part of the Highline Loop Trail, which is spectacular!  Here we ran into Jenifer, remember her, our shuttle driver, we could recognize her voice a mile away.  She was leading a group of hikers and told us it was opening day for this trail, lucky us!  If you have seen a more beautiful landscape than the views from this trail, consider yourself blessed!  Great trip, great group, Montana is awesome! 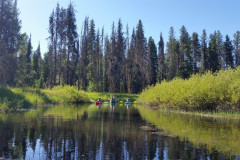 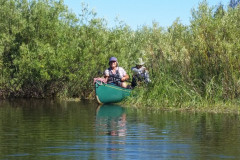 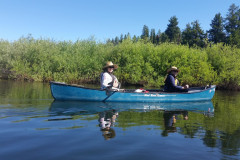 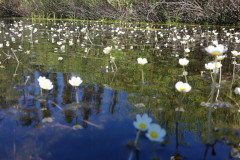 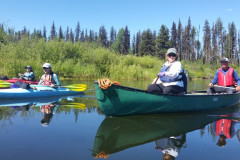 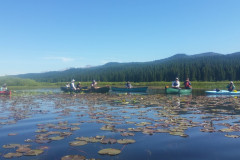 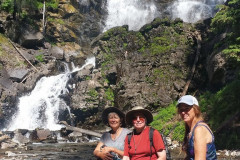 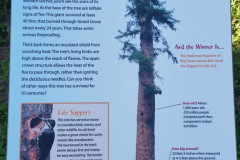 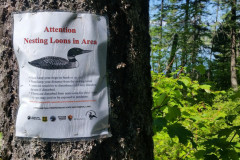 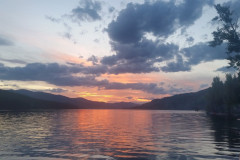 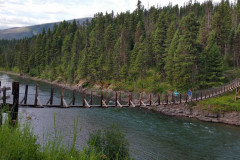 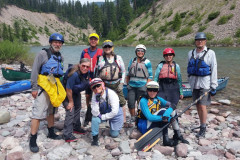 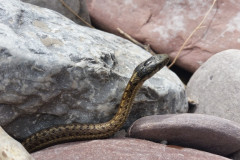 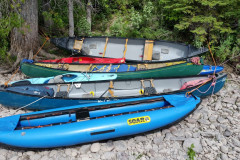 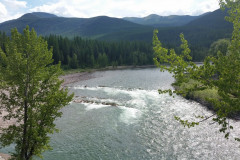 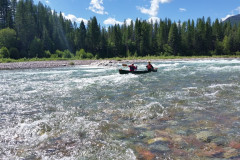 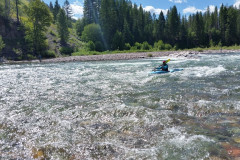 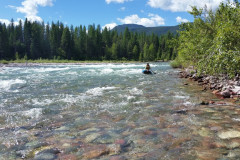 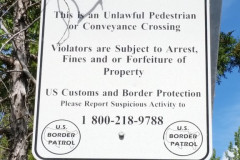 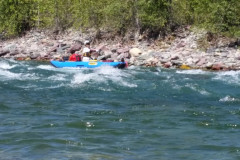 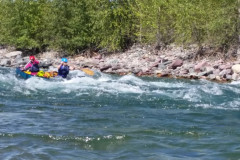 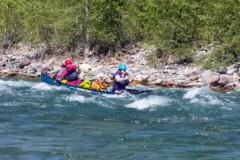