We left home Wednesday June 3rd and drove to Buffalo Wyoming and camped at the Bud Love Wildlife Habitat about 10 miles northwest of town. Here we had an all-night Angus Cattle Serenade, beautiful.

Thursday, we drove to Fort Benton Montana, about 780 miles and met up with Mat and camped at the Canoe Camp on the Missouri River to paddle the Missouri Breaks.

Friday, we did the 5.5 hour round trip shuttle to the James Kipp Recreation Area take out and left our vehicles there. Then rode back with the Outfitter to Fort Benton and launched at 1:30 p.m. paddling 16 miles to Senieurs Reach Camp. The Boater’s Guide said there would be a cattle fence in this area, to keep the cattle out, but it is no longer there (yup, lots of cow pies). The river flow is 10500 CFS. It was a fast pace to start as the river is flowing at 5 or 6 mph, then we had a head wind that made it feel like we were paddling upstream. The wind blew real hard all night.

Saturday we’re up at 5 a.m. and a beautiful full moon is just setting. We were on the water before 7am.  Our first stop was Decision Point at mi. 21.5. Here Lewis and Clark came to the Confluence of the Missouri and the Marias Rivers at high water level and had to figure out which river to follow. We took a short hike up the bluff overlooking the Confluence, very nice. Then onto Coal Banks where the flow was 18000 CFS. Here we paid our camp fees for the trip and paddled on to Little Sandy Camp at mile 46.7. We hiked up the hills above our camp and found three stone teepee rings each about 15 ft in diameter with a small depression in the center for a fire pit. This was an unexpected treat. We saw several eagles today, both bald and golden, and also osprey, lots of deer and some beaver. No breeze at camp and the bugs are bad. We found several ticks on our clothes. Very peaceful trip so far. We paddled 30 miles today. Looks like rain tonight so we set up the river wing and put the tents under it. Sure enough just before dark the wind started howling and after dark the rain was pounding.

Sunday. On the river just after 7 a.m. We were entering the White Cliffs area during our paddle this day. Our first stop was the stone ruins of Monroe cabin where Jack Monroe spent his time trapping wolves and stealing horses in the 1870s and 80s. Then on the Eagle Creek. Here we hiked up the canyon at the upper end looking for petroglyphs. Didn’t find any but didn’t look very hard either. Then we hiked up Neat Cooley into an awesome slot canyon. There were some really tight places to squeeze through and it was a great hike with a little bit of climbing and a little bit of crawling. We’re paddling again past Eagle Rock and Citadel Rock and set up camp at Hole in the Wall Camp, mi 63 after paddling 17 miles. It was early enough in the day so we decided to hike down to find the trail to Hole in the Wall. We ended up hiking and climbing up to the hole at the top of the canyon overlooking the river. What an incredible view from here. The hike took 2 hours. There are also a lot of cows and calves in the fields around the camp. Mat tried to get us some milk – but no luck…. This camp is real nice with a shelter and so we set our tents under it because the weather looked to be turning bad. There was a terrific thunderstorm and lots of rain throughout the night. Glad we did the hike today because tomorrow is going to be a muddy mess around here.

Monday. It’s a gloomy misty morning and we’re off just after 7am. The White Cliffs area we’re paddling through is beautiful. We paddled 14 miles today to Slaughter River camp at Mile 76.8. This Camp also has a shelter that we set our tents up under because of more rainy weather. We got here before 11 a.m.  We hiked 3 hours in the hills behind camp and it was extremely muddy.  Our boots probably weighed 10 pounds each with the sticky mud. The sun didn’t come out until about 6 PM. It rained off and on lightly all day.

Tuesday.  The river is up 6 or more inches this am.  Our boats are partially in the river but tied up well so no problem, but we will surely be more careful from now on.  Off to McGarry Bar camp at Mile 103.  We were leaving the White Cliffs area of the Missouri River, and entering more the of the “Breaks” or Badlands topography.  First stop was Hagedone Homestead mi 97. This is a really cool place with lots of old farm machinery around the cabin and other old outbuildings. Highly recommend this stop. Then we stopped at McClelland Stafford Ferry and hiked the Old Army Trail to the top of the ridge above the river. The trail was built in 1869 to retrieve valuable cargo from a steamboat that wrecked here. The hike was 3 1/2 miles one way, not round trip as the river map book indicated. Awesome views from the top but a pretty tough hike, about a 900 foot elevation gain. We had a tail wind most of the day.  During our campfire that evening, we saw about 20 or 30 bats, circling in the cottonwoods near the campfire.

Wednesday. We paddled on to Gist Ranch Camp at mi. 122.6. The ranch is in a beautiful bottom with several old cabin ruins. Very nice area.  We saw 8 big horn ship on the steep cliff across from the campsite, which worked their way down to the river to drink. Also hiked to Ervin’s Dugout which has been restored about 10 years ago.

Thursday.  Today we tried to find the trail to Snake Point where Captain Clark hiked and got his first look at the Rocky Mountains.  Not sure, but I think we failed, although we hiked a long way to the highest point we could find. .Later we explored the Nelson Homestead at mi 130 then on to Hideaway Primitive Boat Camp mile 136.7.  It’s a tough takeout at this camp – not much of a landing and steep.   Here the Breaks are not as tall anymore and have many pines on top of them, with green rolling/mountainous hills, and the bottom lands are wider and wetter with lots of Cottonwood and Willows. A little rattlesnake swam ashore right where we had our boats tied up for the night. I use a hiking stick to pick it up and flung it back into the river to continue swimming, taking out somewhere well below us. From all the tracks in the drying mud here it was obvious someone had a really messy camp in the last few days, glad it wasn’t us. Today we paddled by a family fishing from the bank that had just caught a huge paddlefish, probably 60 lb. I paddled right up to where they were to get a picture. As I was fumbling for my camera a big brown dog appeared on the bank just feet from me and snarling in my face. So I dropped the camera and began back paddling to put some distance between me and Fido.  Now a little about Mat.  He’s the nicest guy you’d ever meet but he stands out from the crowd as a person of authority. He just has that presence and look about him. Montana has some strict rules concerning catching paddlefish with a lottery to get a permit and I’m pretty sure the dude with the paddlefish figured he was about to get busted. He was in a big hurry to get that fish back in the water and did. He tossed that big old paddlefish in the river right between me and Matt. We all got a good look at it but no pictures. Then it was on to Hideaway Camp at mi. 136.7 to spend our last night on the river.   In general, each night after setting up camp and having our meal we would sit around the campfire and engage in “thoughtful conversation”. Popular topics were current world events, the Lewis and Clark expedition, ice cream, and booze. Now I’m anxious to find an 8th grade American History book and reread up on Lewis and Clark, I must have zoned out the last time. Everyday at least one of us would have ticks crawling on us but none were attached.  The grass and willows along many of the river camps were waist high or taller, making a wonderful habitat for the ticks.  It was a beautiful time of year with many cactus in bloom and lots of wildflowers. There were many songbirds at every camp, along with woodpeckers – and we lost count of the number of bald eagles that we saw.  We found several brass monuments along the river placed here in 2004 commemorating 200 years since the expedition marking places where Lewis and Clark had camped.  These are not easy to find – just little round cement posts that are about a foot high, with a brass emblem on them, in about 2 or 3 foot high grass.

Friday. We paddle to the James Kipp Recreation Area where we had left our vehicles. As we rounded the last bend and spotted the boat ramp there must have been fifty people here cleaning their catfish catch. They were one big family group and each had a job in the cleaning process. They had been fishing for 3 days and had hundreds of big catfish. None were less than 2 feet and many were over 3 feet. They had a chain link fence cage setup in the water at the end of the boat ramp that was about 6 ft square and 4 feet high.  The catfish piled in this enclosure were at least 2 foot deep. Kids would bring the fish up the ramp for a lady with a hatchet to whack off their tails, then farther up the ramp to cleaning tables where guys with battery operated turkey carving knives would fillet them. There were other fellows dragging 30 gallon trash cans full of catfish heads and tails and blood and guts back down the ramp and dumping this icky mess back into the river right where we landed.  Unfortunately Mat’s authoritave presence here did not intimidate this mob at all. They barely left us enough room to get our boats up onto the ramp and unload. We were going to clean our boats out here as they had a lot of mud on them but muddy boats seemed better than bloody boats. What a spectacle this whole event was. There were old geezers in chairs watching, kids running and screaming every direction, dogs were chasing the shadows of birds flying over and blood and fish guts were everywhere while we unloaded our boats in the middle of the chaos, wow!. We then drove 20 miles or so to the Bohemian store at a lonely crossroads for ice cream and our adventure was over.

Several things had made this a great trip — pretty good weather, not too bad bugs, and a good small group. But the main thing is we had the river to ourselves, perhaps because Montana had just lifted the 14 day quarantine for people coming into the state due to Covid 19.  We hardly saw any other people in eight days and 150 miles paddled.  The hikes we did were great and being immersed in the history of Lewis and Clark and the homesteaders who came later in the late 1800’s and early 1900’s, seeing the homes, equipment and artifacts and junk they left behind, made us feel like participants in history. 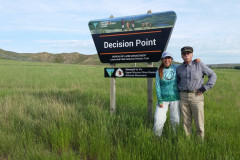 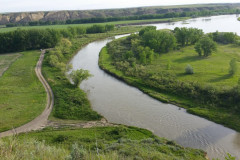 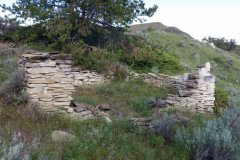 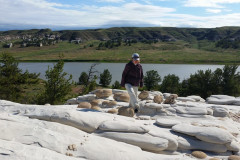 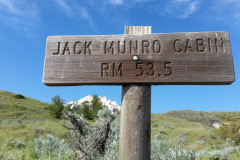 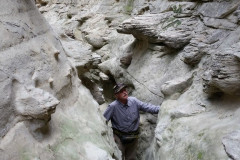 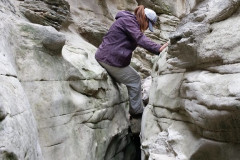 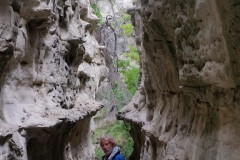 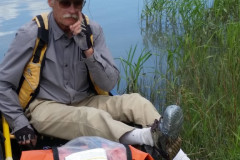 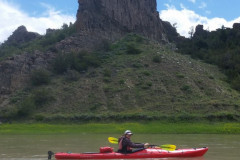 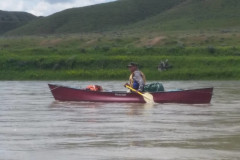 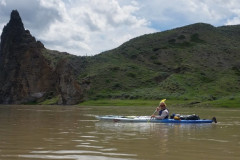 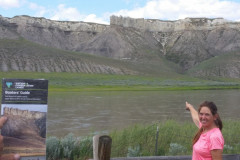 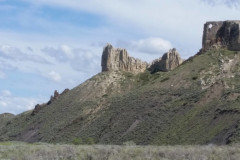 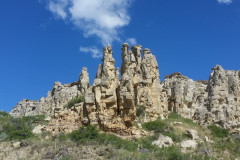 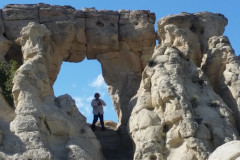 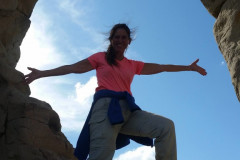 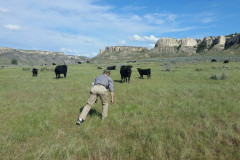 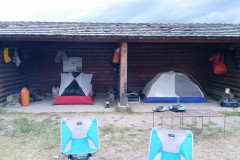 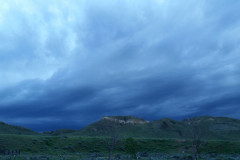 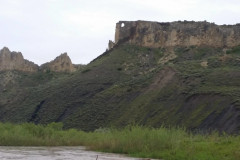 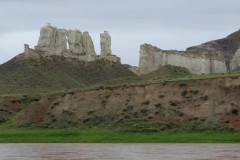 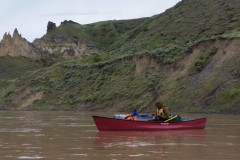 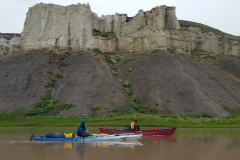