I hadn’t done Gunnson starting from Delta in a long time, and when I had to rearrange my schedule for this, decided to do it as a 3 day trip starting from Delta, with a potential layover day at Dominguez Canyon to have time for hiking.

Since the trip plan called for a 28 mile day to begin with, I “filtered” out slow boats from the trip.

In addition to slower current, there is always great potential for high winds on the Gunnison, and if we got that  in addition to the slower current, we would never make it to Dominguez at the pace we needed to keep up.  So we had a neat little group of 5 boats and six people, which is a nice size, easy to keep together and no long waits for a sweep boat.

The water gradually came up a little – obviously just dam release and consistent for a week or more at a time – and made it to about 680 or so the morning before we started.  The flow was at 700 on the 29th and 30th and up to about 800 the morning of May 1st when we took out – again, in contrast to the 2000 cfs average, and in a huge contrast to 2019’s trip when the water was running  4000 cfs on May 4th, and to 2000 cfs last year.  The wind wasn’t too bad on any day this time, though there were a couple of hours on the first day where we were working fairly hard to maintain our moderate speed.  Took about 6 hours of steady paddling to get to Dominguez, not counting the time at Escalante.

The water was pretty low, and I was often hitting bottom with my paddle while trying to find the deepest channels – hit a few rocks when led astray around one island, but mostly not too bad.  But there were lots of places I was just barely missing the rocks too.  I’d guess the current was running about 1 to 1.5 mph, so with a steady 3mph paddling speed, we made decent time.  I was somewhat worried about  the CII “Hail Mary” rapid at this low level, but it was fairly straight forward and no problem, and the go around at the diversion dam was fast and slalomly but also not a problem for this group.  The CII across from Dominguez did look really bony, but since we camped there the first night, we took the left channel and avoided that one.

New this year, a permit is required to camp on the Gunnison, so we had to make a stop at the Escalante put in to fill out the form. At this time, the permit was free.  For the past several years the BLM has been monitoring use by having trips register there, but this escalation to a required permit is worrisome to me.  It’s such a PITA to get permits if they are limited, and permits ultimately go to a fee basis.  It is so nice to have a “free” river, hope it stays that way.  There isn’t all that much traffic on the Gunnison, especially if starting on a weekday.  Weekends see more traffic, but because the take outs are too difficult for most rafts to use, traffic is mostly canoes and kayaks.  We saw no one else on the river until the second afternoon when 3 or 4 yaks went past our campsite.  There were maybe 20 or 25 people hiking at Dominguez, which is a popular spot accessed via footbridge at Bridgeport, and that was on a Friday – weekends see lots more than that, and they all pass close to or through the campsites – another reason I don’t normally camp there..  We all hiked up Dominguez canyon 3 or 4 miles, to see the pictos and scenery, and some of us hiked up the ridge behind camp at Poverty Flats as well that afternoon.

Not a whole lot of wildlife other than the obnoxious geese, but we did see a pair of pelicans, lots of ducks, a couple of herons, many eagles, one osprey, one deer, and 6 or 8 bighorn sheep down near the river for a drink.  And a tom turkey made a nice alarm clock the morning of the last day.  One thing about this group, there were no slugabeds and we were on the river at 7:45 on the last morning.  Instead of laying over at Dominguez, we moved camp the second day after we got back from our hike – this leaves only 7 miles for the final leg, and takes the afternoon winds out of the equation.  So with the weather cooperating and just enough water, it was a nice trip. 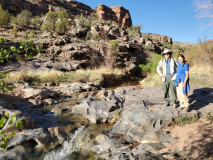 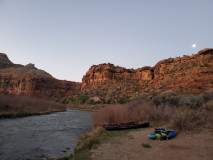 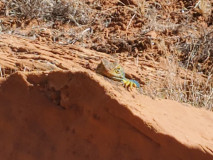 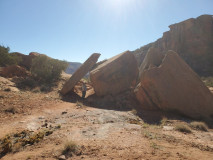 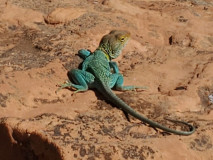 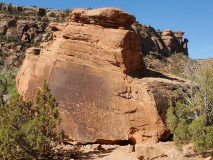 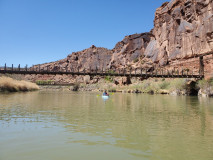 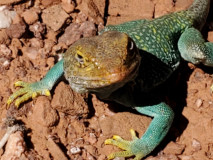 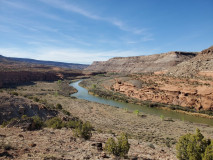 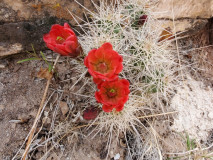 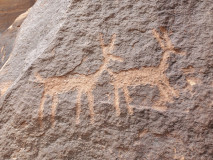 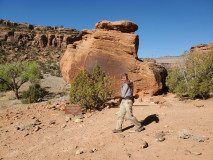