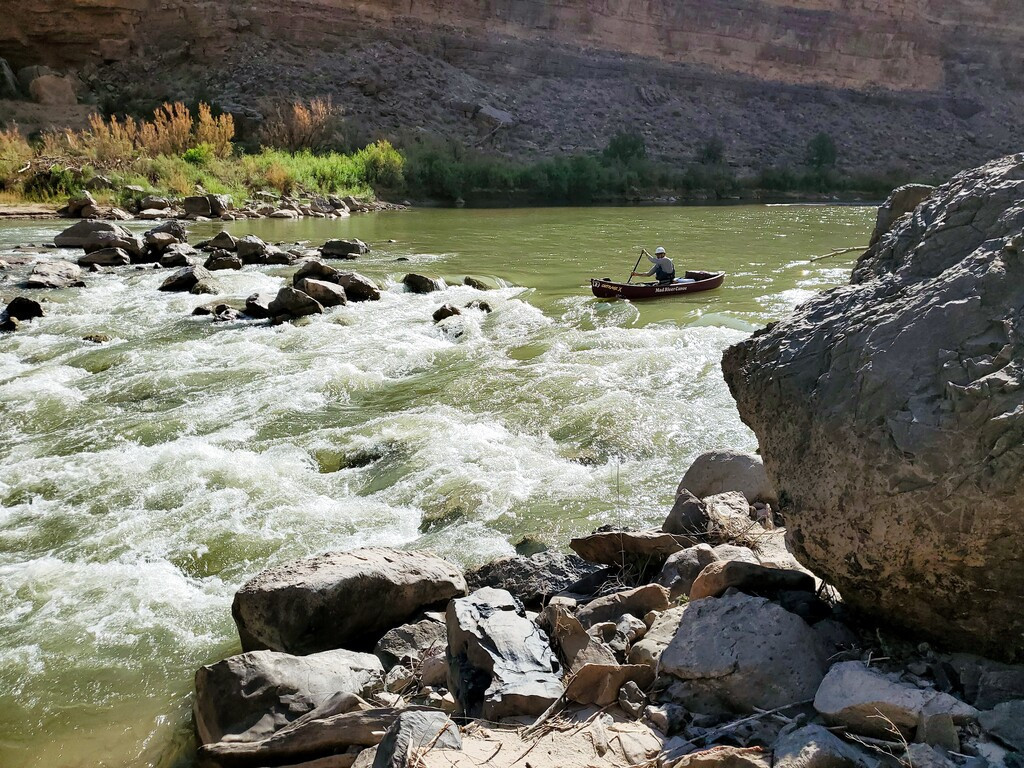 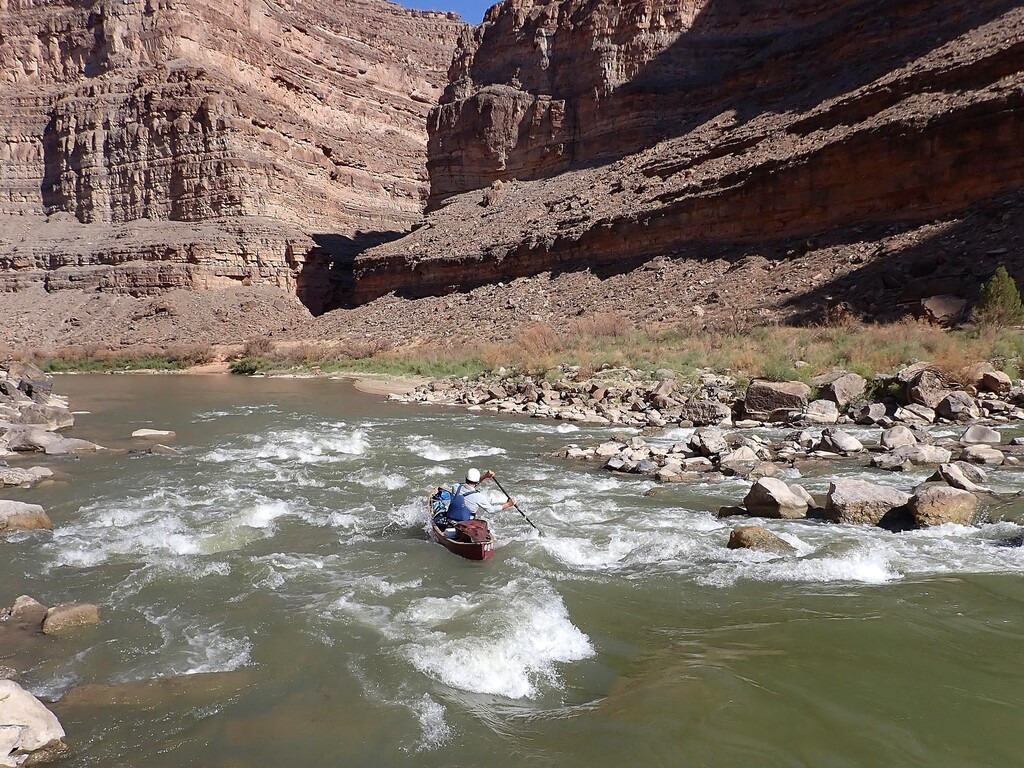 On this trip we had 1 oar raft with 2 passengers and an oarsman, 1 inflatable kayak, 3 kayaks and 2 solo canoes. Nine people total.

July 11th we all met at Sand Island campground just outside of Bluff Utah, it’s 108ﾟ at 5:00 p.m. 7/12 we rig our boats and turn our keys over to Val, the shuttle company to move our vehicles to Clay Hills, the take out 84 river miles away. Due to low water conditions around 500 CFS our final destination was undetermined until yesterday. The river forecast was for 700 CFS by Friday so we were able to do the whole trip, rather than take out Mexican Hat. Water less than 500 cfs would make the last several miles very difficult, especially for the raft.  Our first stop today is Butler Wash Petroglyph Panel. It’s huge and very impressive. Then on to River House Ruins and Barton’s Trading Post, a well-preserved cliff dwelling site, also very impressive. Then it’s on to camp at Midway, river mile 13.  At 4′ rapid class ll Janet hit a rock and flipped, and somehow broke the shaft of her paddle in two. It’s a good paddle too, Werner carbon fiber shaft. At camp tonight the” usual suspects” took turns playing guitar and singing obscure songs, it was a fun day.

7/13 Had two big rams browsing just across the river from our camp this morning. They both had lots of ear tags and a radio caller. There were a few class ll rapids today for a little excitement. We stopped at Mexican Hat boat ramp. We were going to walk to town but a van picked us up and gave us a ride. The cafe at the RV resort was closed so we got some hot dogs and ice cream at the 7-11 store. Camped before mile 29 at an unmarked camp. Hot and windy day. The river is a nice shade of light green and pretty clear, especially considering it is known as the siltiest river in the country.

7/14 Had a little shower overnight. Everyone got up to put their rain fly on. It’s been so hot, even at night, that it’s hard to sleep with no breeze. We hiked up the saddle to Mendenhall cabin. What an awesome view from here. Some shallow water today caused issues for the raft.  As we passed Gooseneck State Park we could see tiny people 1000 feet or more above looking down at us. Then when we passed the 1st Honaker camp we all felt kind of bad for the poor woman that just happened to be sitting on the groover near the river, oh well. What could she do? She just sat there as we all passed by, one by one, tee hee hee. She will be forever known to this group as “The Groover Lady” We camped at Honaker 2. A couple of us hiked a way’s up the Honaker Trail for awesome views of the river and canyon below. We saw lots of big horn sheep today, all collared and lots of ear tags.  Paddled about 16 miles today.

7/15 A beaver family entertained us early this morning swimming by our camp then splash and kerplunk. They came ashore across the river from us a couple of times, so we got a good look at them. Had some trouble at the Ross Rapid, one person bounced off the raft, and a drag line on a water bottle got caught up on a rock causing an inflatable kayak to flip and get stuck in a minor rapid. No harm done. We set up camp at John’s Canyon, 14-mile paddle day. More swimming until we got shade. The river dropped 2″ from when we arrived until dark.

7/16  Friday, the river is bright red this morning, what a change!  It came up 3 or 4″ overnight and is slowly dropping again. The color change must have been from the little rain we had 2 nights ago. A up-river side canyon must have received a lot more rain than we got, flash-flooded and it took two days to catch up to us. We got to Government Rapid today, the most notorious rapid on the river. Most of us lined it but Tracy ran it, pinballing his way through without missing a single rock, perhaps hitting some multiple times, and somehow made it. Kit went next and did great, of course.  Then Tracy ran another boat through doing much better than his first attempt but flipped at the bottom, no harm done. We camped at Slickhorn C paddling about 8 miles today. We hiked up the canyon and also up to the old oil well site and old roads and trails.

7/17 Water is up a little today and still bright red. We paddled 9 miles to Oljeto Wash and set up camp, hiked and swam some.

7/18 This am we saw a darn big scorpion, 3”-4”. Today we paddled 8 miles to the take-out a Clay Hills, only having to get out to drag our boats a couple of times.  It was hot as blazes, but a pretty great trip. 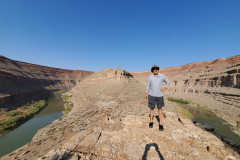 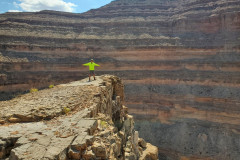 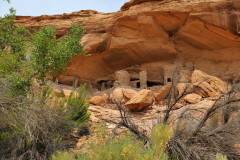 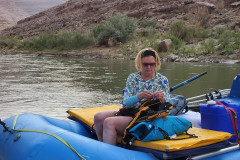 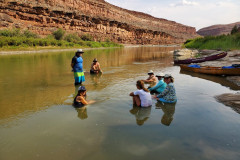 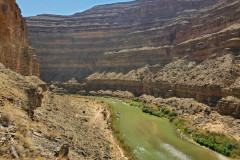 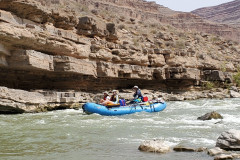 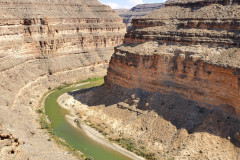 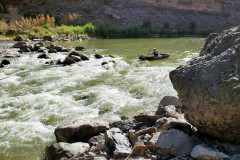 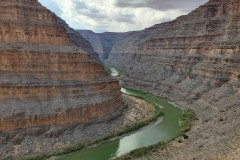 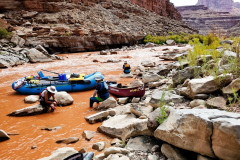 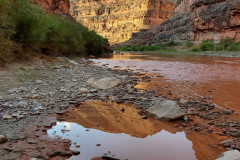 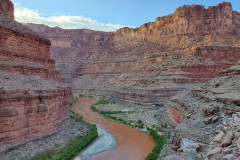 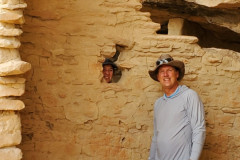 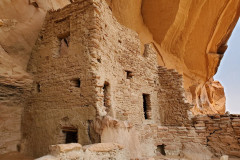 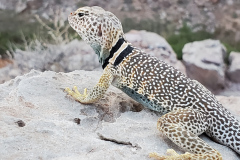 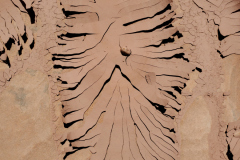 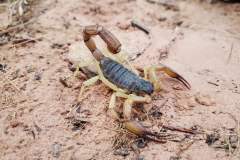 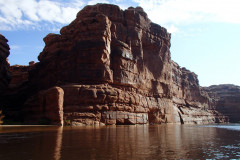 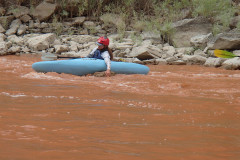 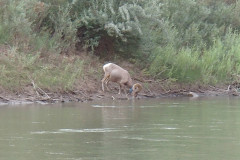 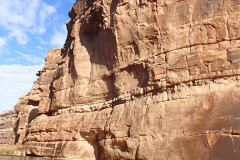 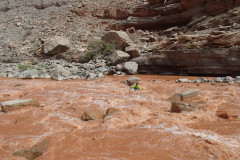