Eleven Rocky Mountain Canoe Club member paddled Grand Lake and Shadow Mountain Lake.  It was a chilly overcast morning but once we got paddling into the light headwind, we quickly warmed up. Our fleet consisted of 1 tandem canoe, 3 solo canoes, and 6 kayaks. We launched at Grand Lake Town Dock and Beach and paddled across Grand Lake through the channel into Shadow Mountain Lake. There were lots of osprey out today, but we didn’t see any of them fishing. We saw several other paddlers and a few power boats, but we were not at all crowded.  At the far end of the lake, we paddled around several small islands. Most were posted “closed due to osprey nesting”. The only island that wasn’t posted that we planned to stop and rest on was occupied by a young moose, so we decided to leave him at peace. We all knew momma moose might be somewhere nearby, and she may have a nasty disposition. From our boats we enjoyed watching junior munching on the willows on the lake shore while he totally ignored us. We also saw lots of Canada geese, a few white pelicans and a tree full of cormorants. Next, we paddled back to Grand Lake, past our launch site to the far end of the lake. Grand Lake has many magnificent lakeside homes, most have awesome boat-in garages. At the far end of Grand Lake, we took a short hike into Rocky Mountain National Park to see Adams Falls. As expected, the falls were raging due to spring runoff, an awesome sight. On the paddle back the sky that looked threatening all day finally gave us a little rain, and a big headwind. The wind made the lake bouncy, adding some excitement to the day. After the paddle we all went to the Sagebrush Restaurant for some great barbecue and brews.  We paddled just over 10 miles in 6 hours, including rest breaks and a nice little hike. This was the first event for three new club members. Hope we made a good impression on them. Everyone seemed to have a real nice time. 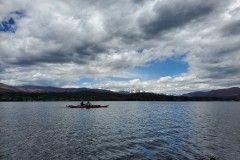 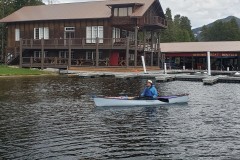 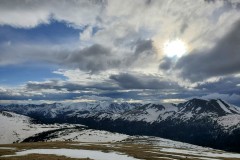 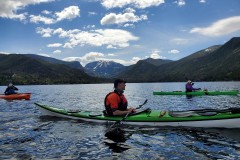 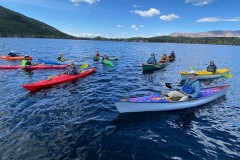 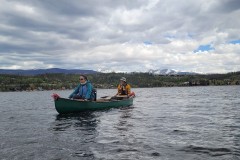 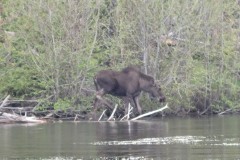 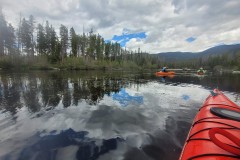